Here’s an interesting snippet from Charles Smith’s ‘The Ancient and Present State of the County and City of Cork’  published in 1774:

The Ovens or St Owens parish is washed on the S and E sides by the Bride and on the N by the Lee In it is a most remarkable cave beneath a stupendous limestone arch 1 2 foot high at the entrance but declines to less than 6 In some places it is higher and in others so low as one is obliged to creep in advancing through it The pas sage is on the W side but in about 20 yards the cave winds towards the S and SE Another way leads on due S to a well about fourscore yards from its entrance There are many other branches some running in a serpentine manner of others like so many alleys eroding each other mostly so broad that 6 or 8 persons may walk abreast the whole forming a perfect labyrinth under ground In order to visit these passages it would necessary to take the fame precaution as made Theseus use when he was obliged to fight the Minotaur in the Cretan labyrinth which Virgil thus elegantly describes.

Unfortunately there was no stupendous limestone arch to be seen, the old entrance to the limestone cave was largely filled and entrance to the land feature signs with trespass warnings. We did manage to find an entrance in the end though, it was a tight fit and we were doubtful that we would get very far, so it was a nice surprise when the chambers suddenly opened up before us about 2 meters in.

We went in basic gear such as headlights, waterproof boots, gloves, knee pads, flare and a camera. 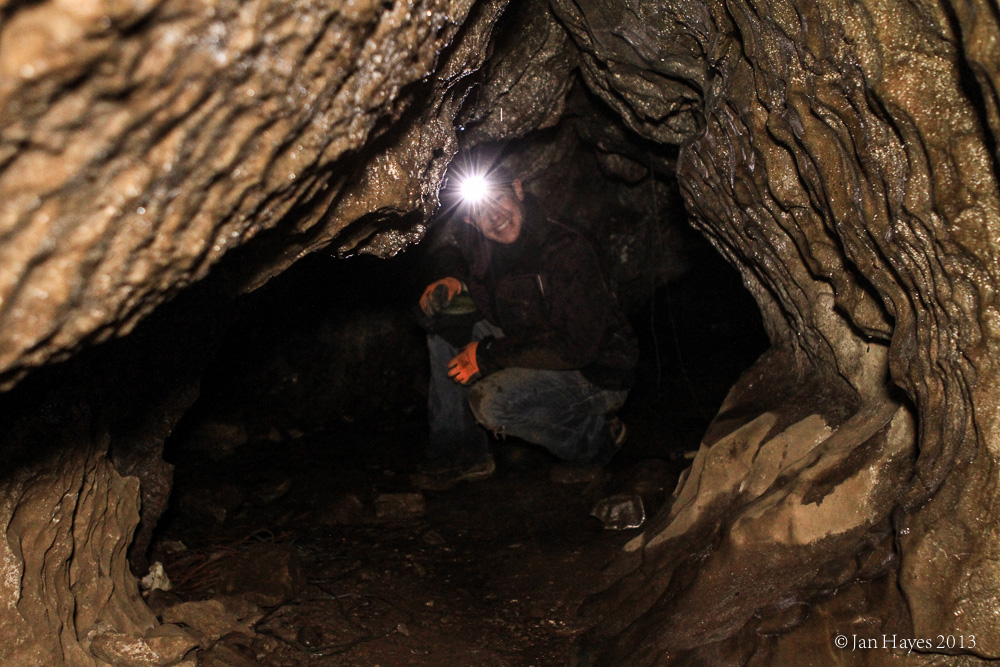 Friend poses in front of the camera 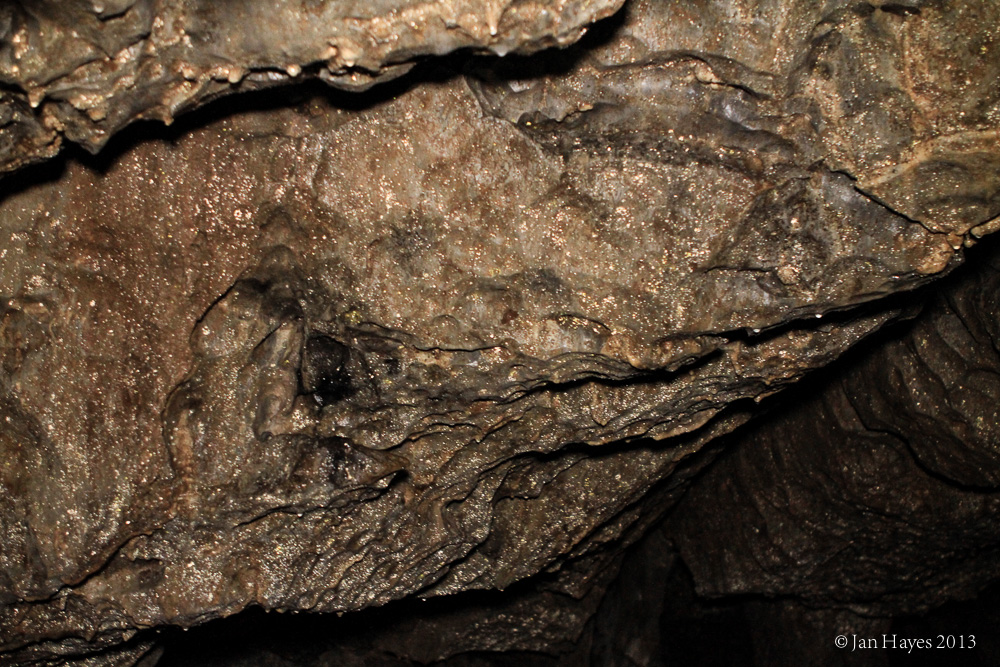 Material on the ceiling reflects the flash from the camera, looks like gold but touching the stuff felt damp and spongy. 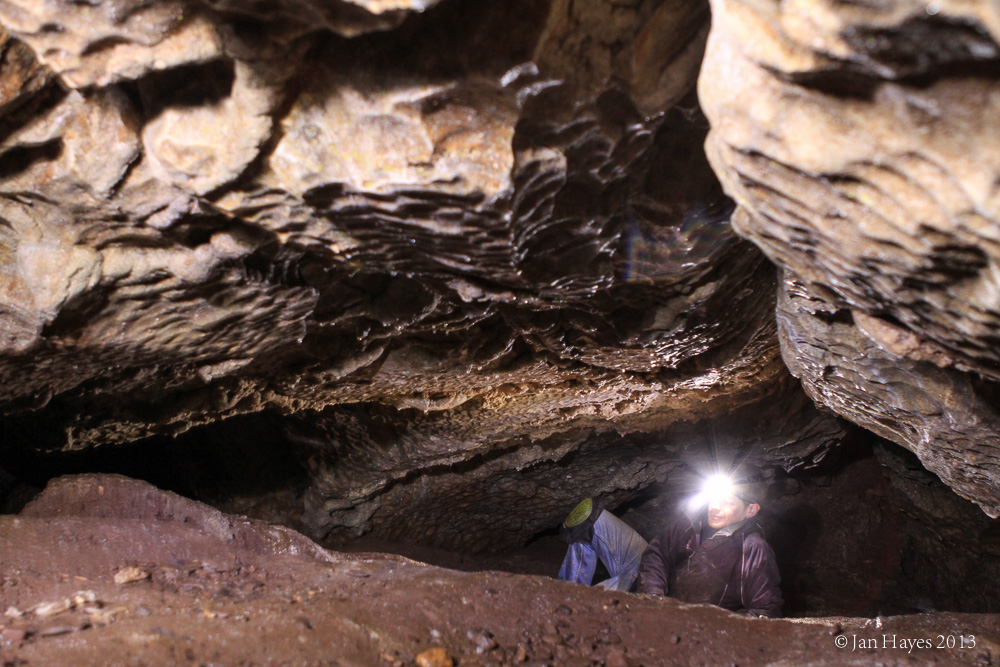 Most sections of the cave only had a height of less than a meter, often forcing us to crawl on all fours. Kneepads were a must for the occasion. 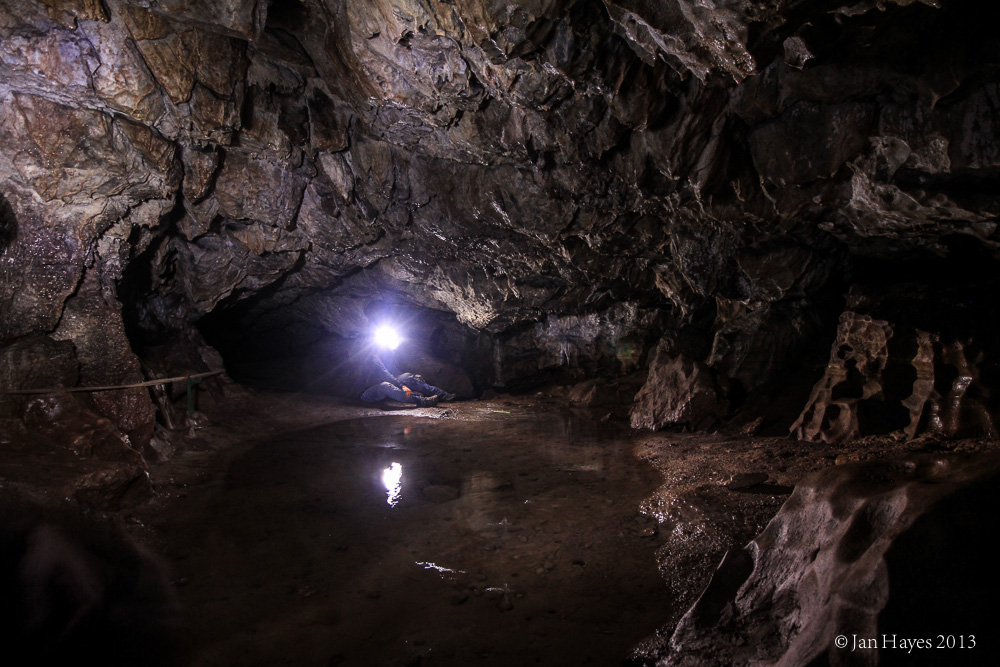 Larger chambers compared to other sections of the cave. Notice the makeshift rope on the left, this probably helped guide explorers back to the entrance as the cave system was quite labyrinthian. 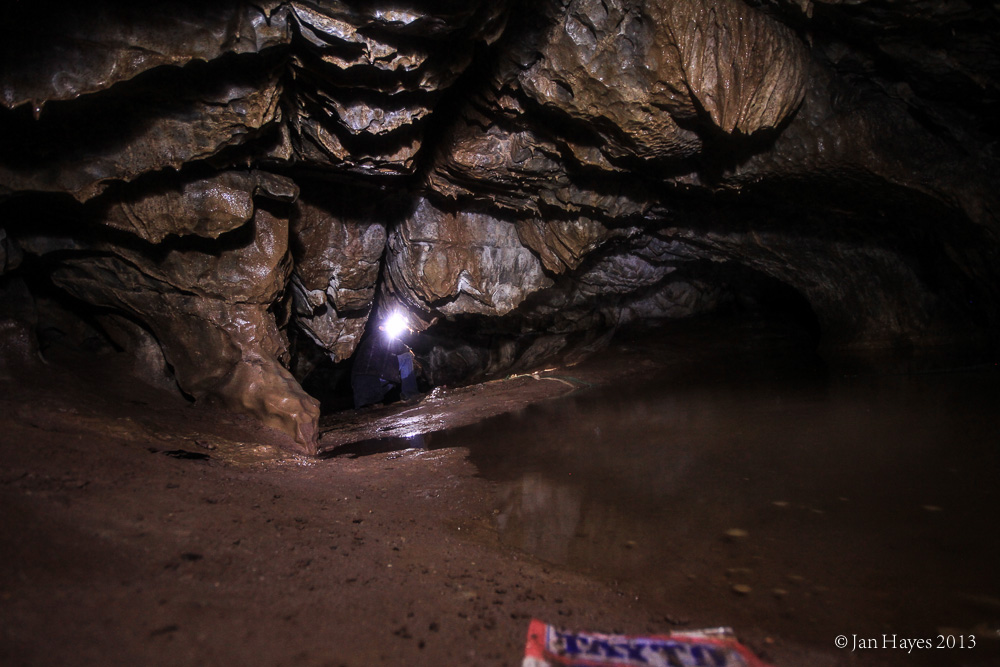 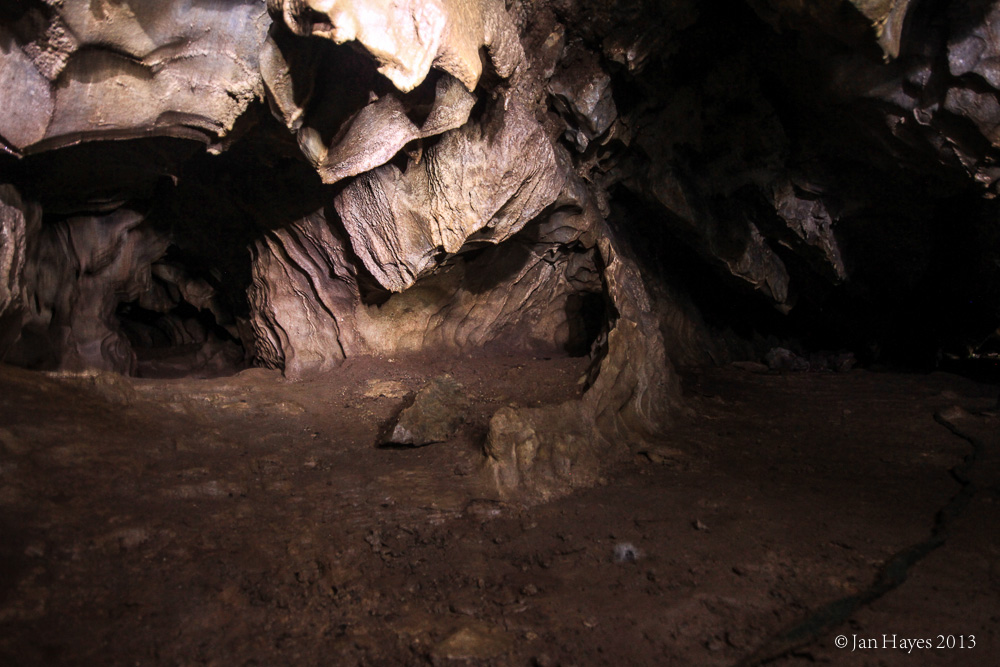 Corridors often broke into other corridors, we stayed in path where the makeshift rope was guiding us though. 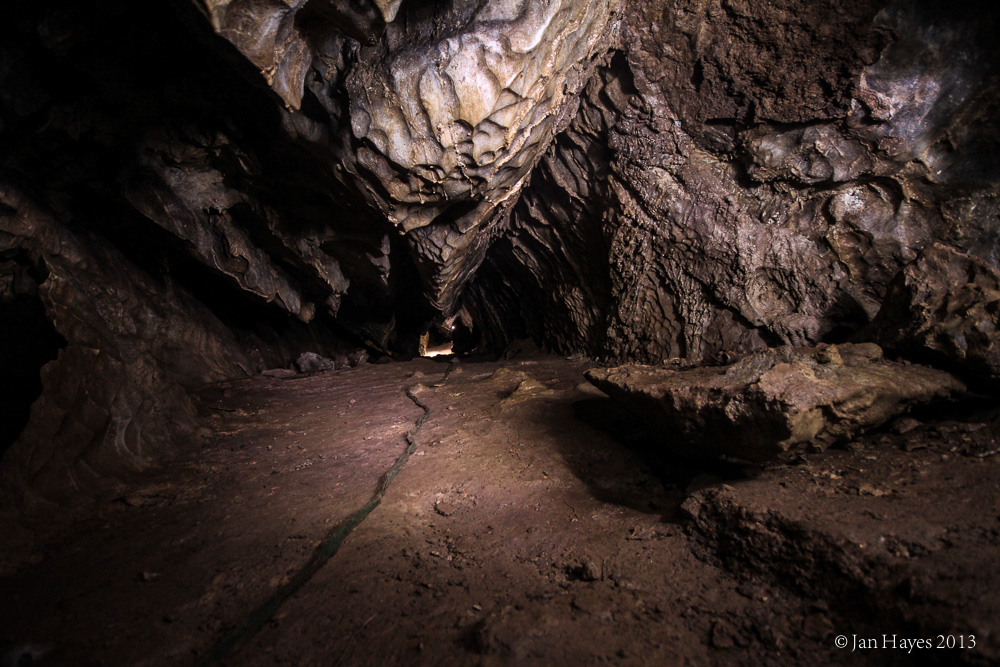 Following the makeshift rope. Every now again we would find burnt out tea lights beside it. 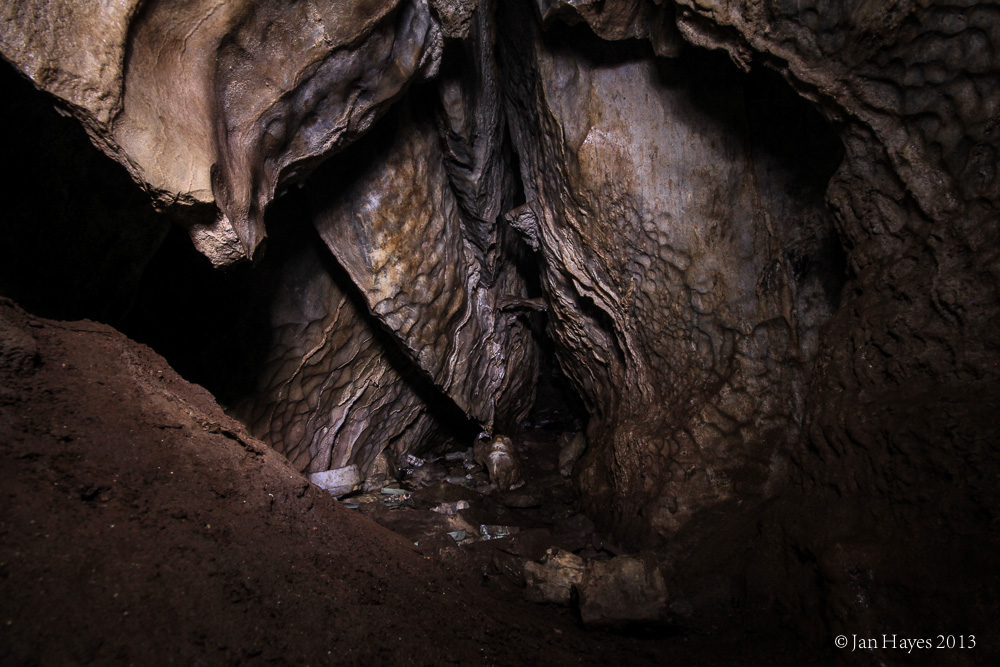 We found a sleeping bag, some burn out tea lights and a small pile of rubbish in this dark corner. Did someone seriously consider living here? 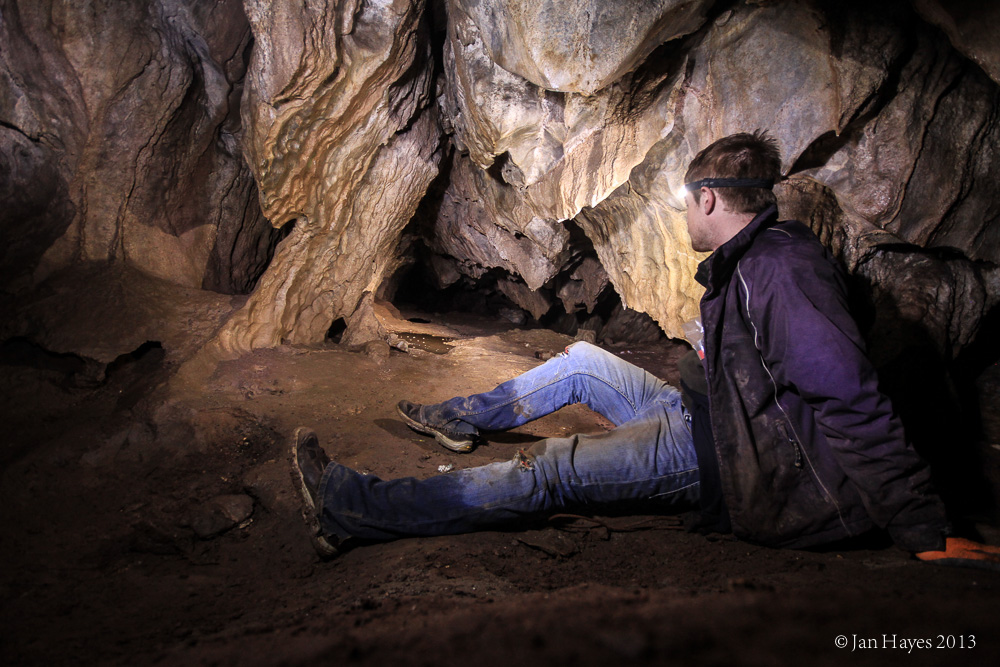 Directly above us was the N22. Each vehicle that drove passed above us made an ominous sounding hum. 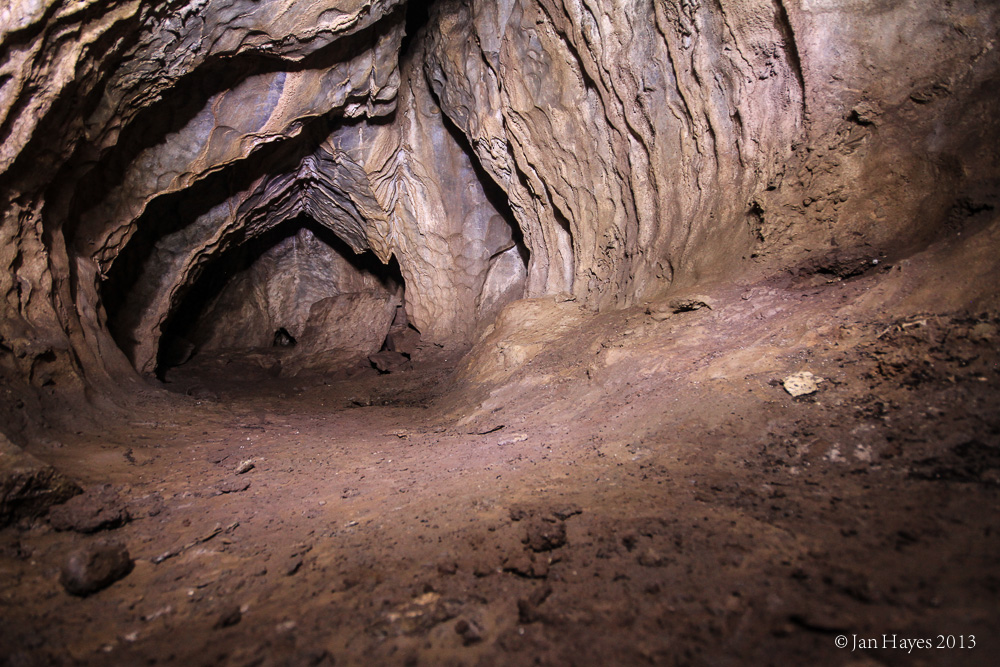 Dead end or a tight fit? 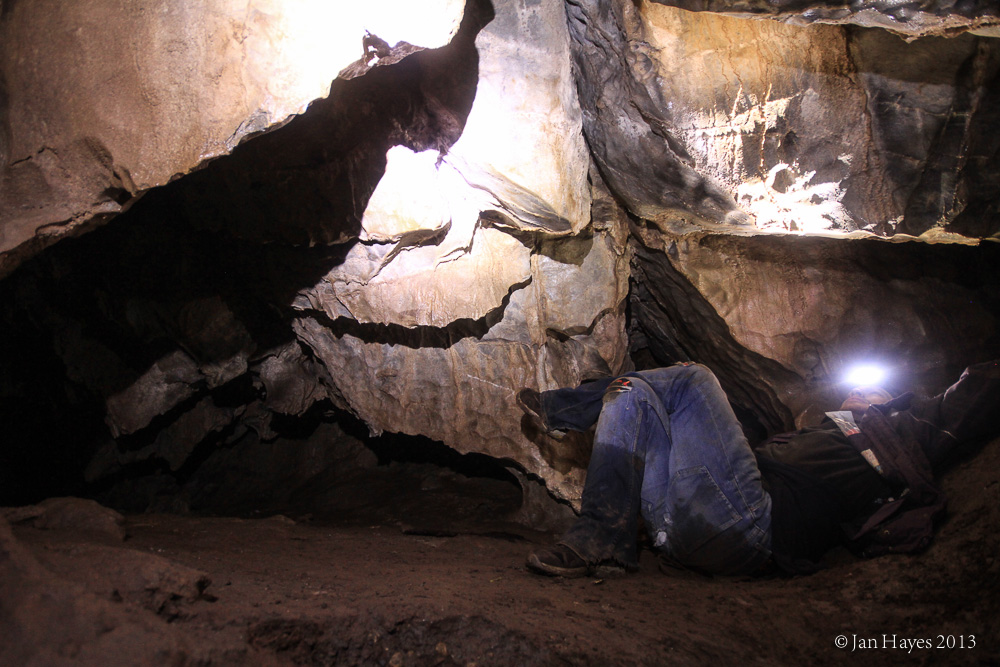 Relaxing and enjoying the sounds of the N22 above us. 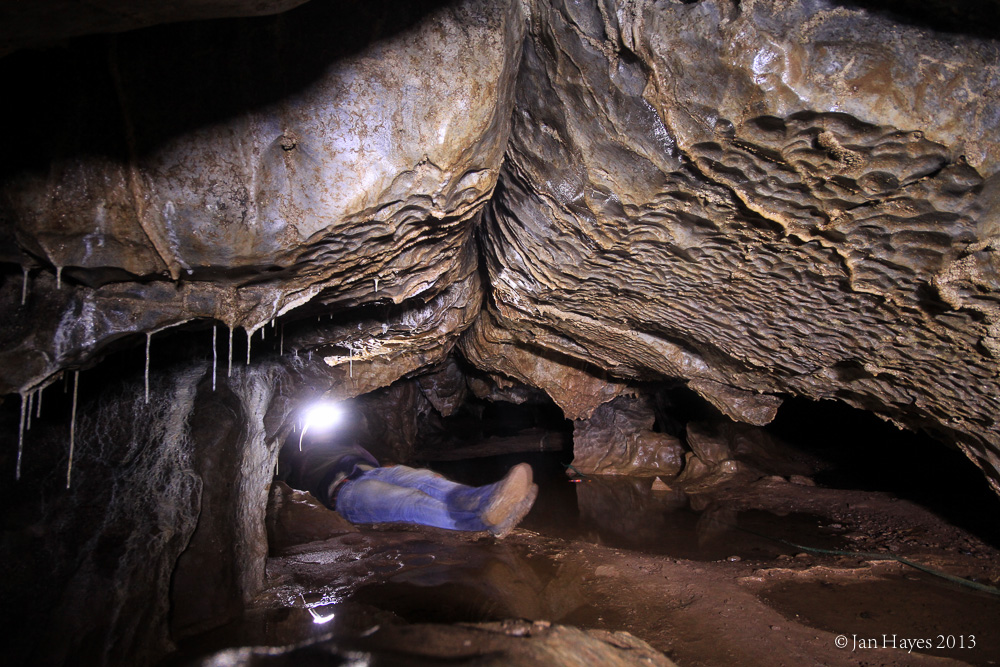 Many of the corridors had shallow pools of water in them. We only came across one corridor that had water coming up to our waist level. 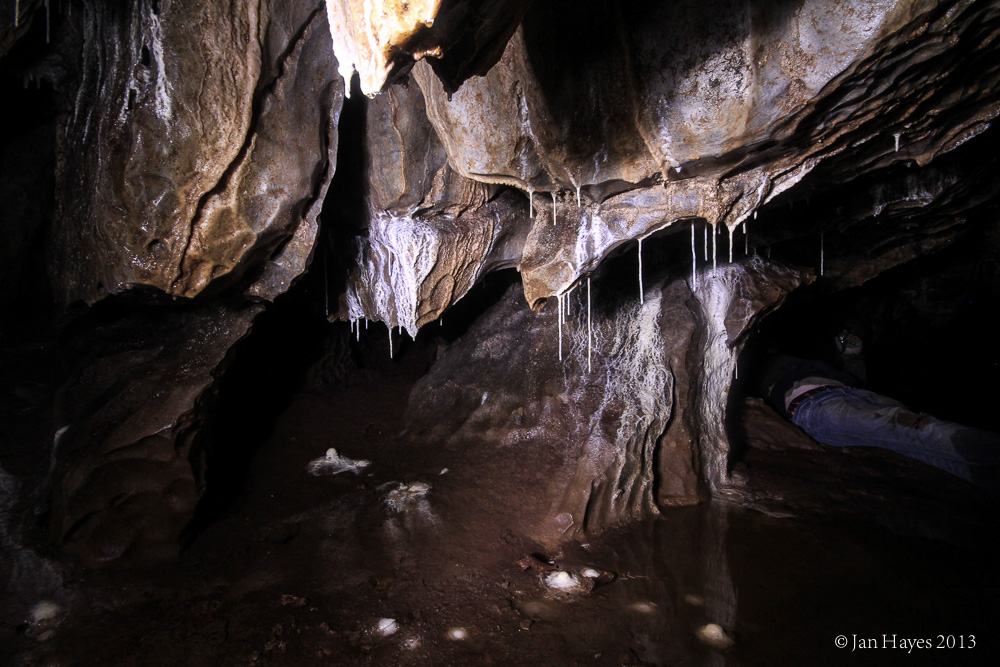 Mini Stalactites, give them a few more years before they turn into something more impressive … 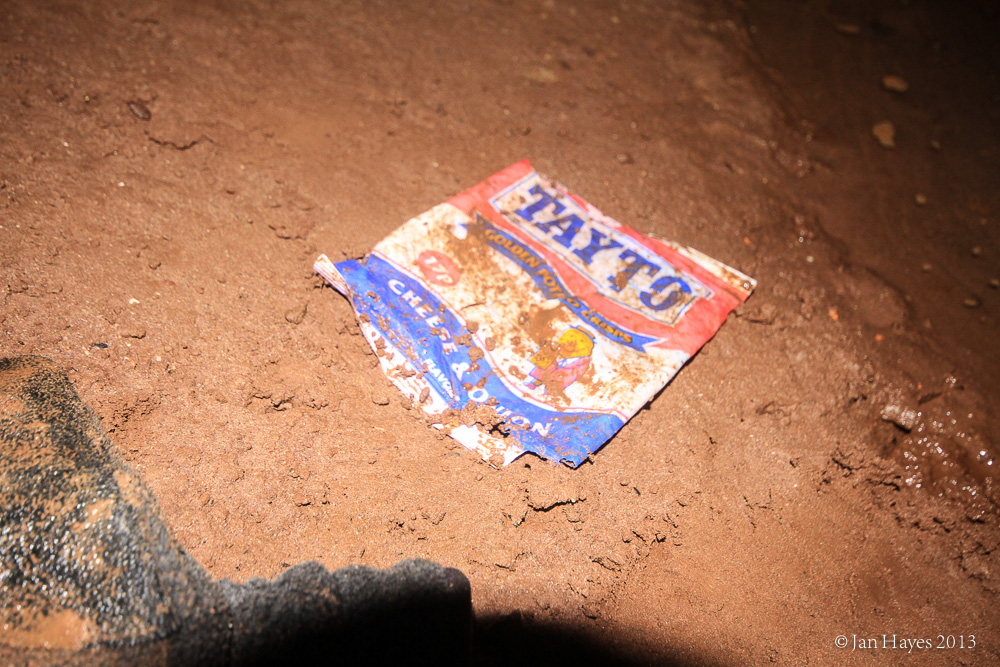 Remember when a bag of Taytos was 17p? 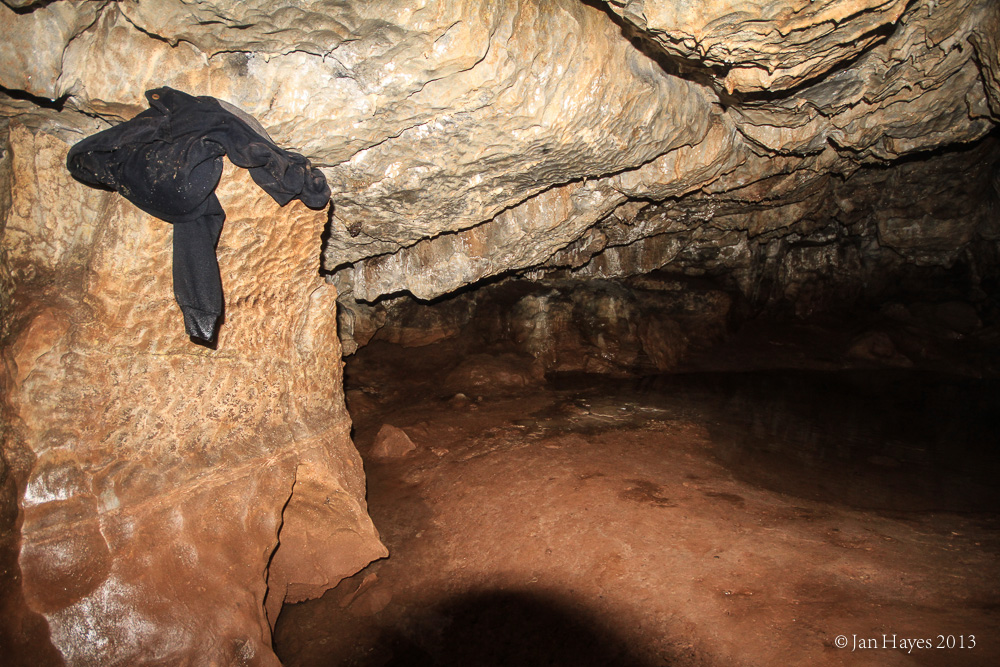 Any spellunkers looking for their black hoodie? 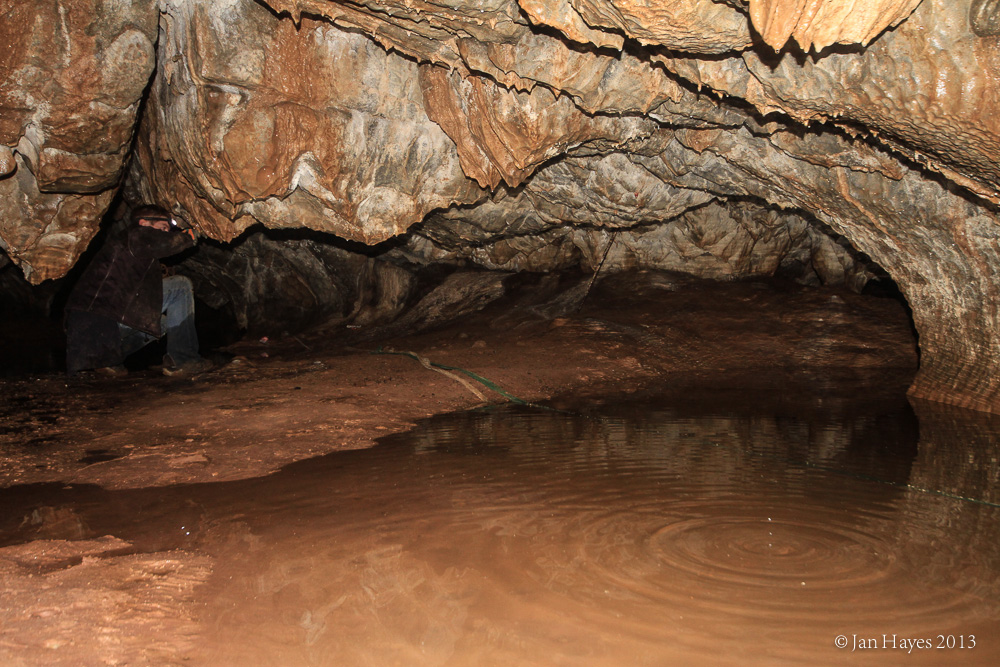 Another pool of water 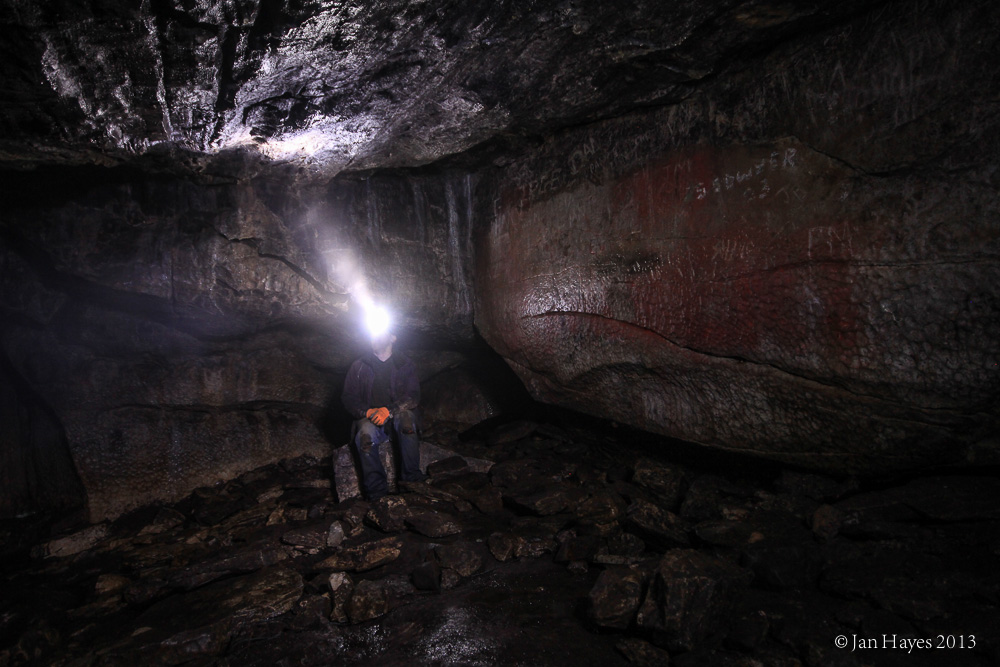 A chamber that was apparently used as a Mass Rock during Penal Times. We couldn’t find anything to indicate it was used for this purpose though, there was plenty of rubble on the ground and graffiti on the wall. 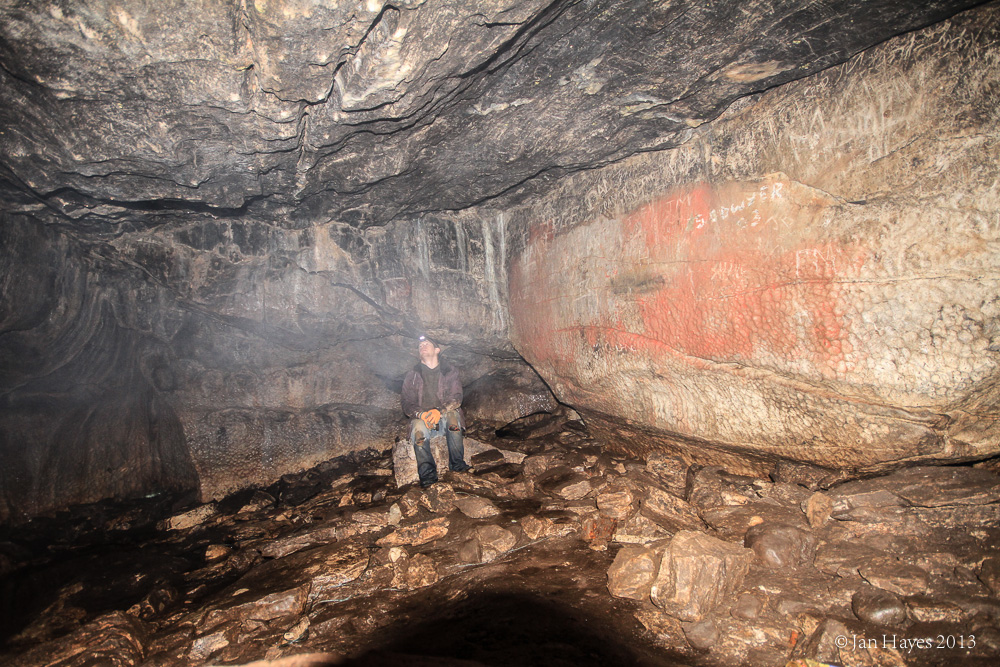 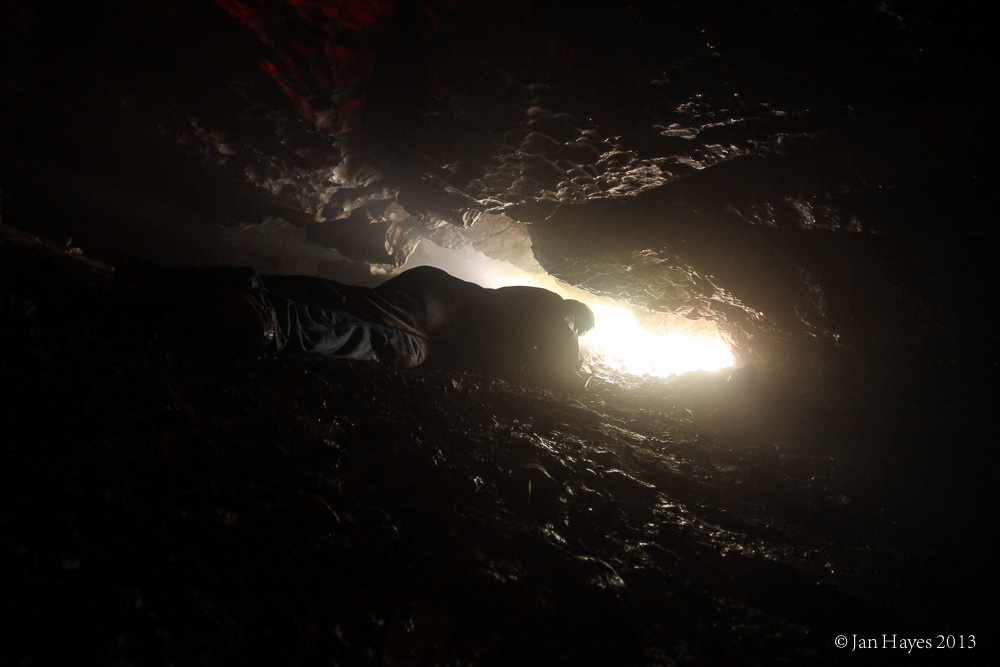 After 2 hours of exploring we were well covered in mud, over that duration we actually didn’t get too far to know what the extent of the cave system which is said to extend all the way to Gillabbey in Cork City. Tired and bruised, we crawled back out to civilisation.

The Ballincollig Heritage site features a post about the cave which makes for a good  read: http://ballincollig.wordpress.com/caves/

The Clare Caving Club have some handful of photos on their flickr stream ( although it’s not labelled properly ) in this links: